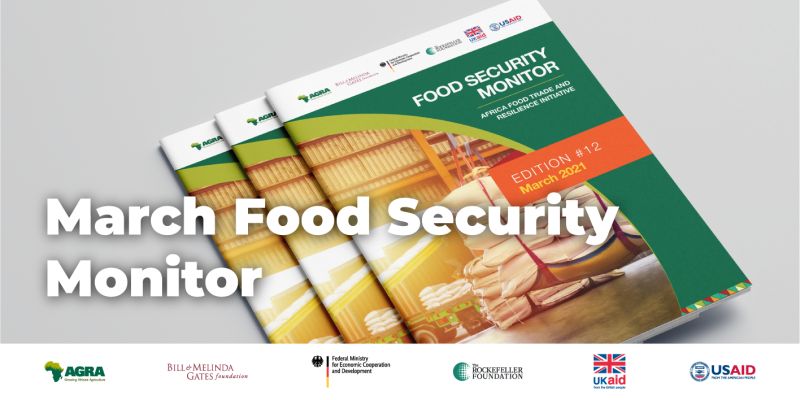 The March Food Security Monitor Report is out!

The report highlights the food security situation in East Africa, West Africa and Southern Africa. In March, the Food and Agriculture Organization of the United Nations (FAO) and the World Food Programme issued an early warning that 20 countries across at the World, out of which 13 are in Africa are food insecure as a result of the covid19 impact, conflicts and displacements, weather shocks, desert locust amongst others.

On food trade, the report highlights the impact of Kenya’s ban on maize imports from Uganda and Tanzania due concerns on aflatoxin, this decision was however reversed. The report further projects that the surplus production of maize in southern Africa will increase trade activities across the region.

In West Africa, the decision by the Nigeria Government to close it borders particularly smuggling of rice has not been effective due to upsurge of new smuggling channels. Lastly, on the desert menace in East Africa, FAO projects the swarms in Ethiopia and Kenya remain immature and continue to decline due to poor rains and ongoing control operations.

Read the full report complied by AGRA at: https://agra.org/wp-content/uploads/2021/04/Food-Security-Monitor-March-2021.pdf